No Result
View All Result
Home

This image released by Disney shows Emma Stone in a scene from "Cruella." Costumes for the film were designed by Oscar winning designer Jenny Beavan. (Laurie Sparham/Disney via AP)

German punk princess Nina Hagen isn’t the most obvious inspiration for a Disney movie, but “ Cruella ” is also not your typical Disney movie. The new live-action origin story about the black-and-white-haired cartoon supervillain is less about a maniacal dalmatian-skinner than an aspiring designer with a punk sensibility out to disrupt the stuffy ways of the past in 1970s London.

Departments like hair and makeup and costume design work overtime to blend into the fabric of a film. But in “Cruella,” the story itself gives them the spotlight. So director Craig Gillespie and star and producer Emma Stone enlisted some of the best in the business to help: Two-time Oscar winning costume designer Jenny Beavan, who has mastered everything from Merchant Ivory period films like “A Room with a View” to the post-apocalyptic looks of “Mad Max: Fury Road,” and BAFTA-winning hair and makeup designer Nadia Stacey, who transformed Stone into an 18th century social climber in “The Favourite.”

“I never thought I would do it. It was never a film that would come up in my range of stuff because I’m not really into fashion,” said Beavan. “Of course, I was around in the ’70s. This film and script triggered my memory of what it was like.”

With the script and Gillespie’s comprehensive mood board and soundtrack in mind, Beavan and her team set off both designing originals and scouring London’s vintage stores for real pieces and things that had at least the spirit of the ’70s, when the buttoned up styles of Dior and Balenciaga were giving way to the likes of Vivienne Westwood with zippers and holes everywhere

“It was just really fun,” Beavan said. “Every time we produced something new, (Stone) seemed to take to it like a duck to water and make it work. She is absolutely and without a doubt, totally fabulous.”

One of the final looks that stood out for Beaven was Cruella’s military-styled jacket paired with a big skirt and Doc Martens.

Stacey said she was given one rule for Cruella: The black and white hair needed to be on the same sides as in the cartoon. Anything else was fair game.

“I sort of went at it with a punk spirit, like, you know, I’m just going to do this and go for it and see what happens,” Stacey said. “The punk revolution was such a change in fashion and music and makeup and hair. It does really kind of follow the narrative of Cruella as well.”

Stacey found inspiration not only in Nina Hagen but Blondie frontwoman Debbie Harry, who she said often paired edgy stylings with pink lipstick.

“That sparked an idea that I could make stuff punky or messed up but keep a beauty element to it, which makes it not just period and punk, it gives it a fresh take and makes it modern,” Stacey said. “So if you are doing a really graphic, harsh (look), you can do a softer beauty lip with it. Or if she’s hanging off a garbage truck, she can still have pink and blue jewels that contradict with the situation. There’s that kind of juxtaposition, a real clash of things that I tried to keep in mind when creating.”

One of Stacey’s most striking looks (and one that many beauty bloggers have already recreated and sent to her) features Cruella with a black spray paint mask across her eyes with the words “The Future” stenciled out. The font, she said, was inspired by a Sex Pistols album cover.

Stone, she said, was game for anything. She didn’t have to dye her hair for the role, but Stacey said she would have in a heartbeat.

“I weighed in a bit, but there were geniuses that were creating her look,” Stone said. “Putting on all of that really did make you feel like Cruella de Vil.” 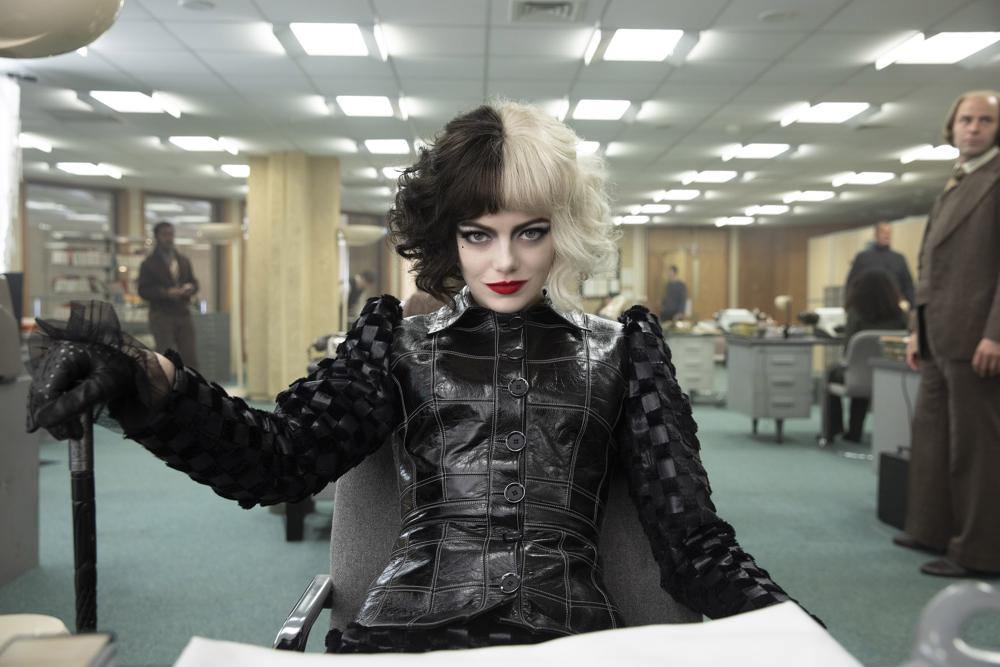 Emma Stone appears in a scene from “Cruella.” (Disney via AP)

The whole endeavor was an epic undertaking with a reported $200 million budget. There were some 277 costumes for the principal cast, 47 changes for Cruella/Estella and 33 for Emma Thompson’s Baroness.

“Every week I’d come in and my (assistant director) would be like, ‘Oh, we’ve got a big week this week,’ and I said, ‘Every week is a big week.’ We have four to six hundred extras and balls and galas,” Gillespie said. “We were just racing all the time.”

One gala scene alone required 152 wigs and dressing 149 members of the supporting cast. Another pivotal party had 80 dresses and 88 wigs, each of which required four hours of prep.

“I’ve never seen such attention to detail before,” said actor Kirby Howell-Baptiste, who plays Anita Darling. “It also just kind of felt like a party, like, the scene where we were outside and essentially, like, at a rock concert felt just like that.”

“Cruella” is currently playing in theaters and available to rent on Disney+.