Despite GOP Efforts, Evan McMullin Will Appear on Utah Ballot

Hershey’s Creates Chocolate Bar to Celebrate All Women and Girls

by Inside The Nation Staff
in international News, Politics
0

The Polisario Front is using child soldiers in in their ongoing war against Morocco. The International Alliance for the Defense of Rights and Freedoms (AIDL), an NGO with ties to the United Nations has denounced the practice which, they point out, can be plainly seen in photos of the Polisario Front. Images of armed youths in connection to the report have been published on a Spanish news site.

AIDL slammed POLISARIO, which many consider a terrorist group, for its use of child soldiers. The group is largely based out of a refugee camp in Tindouf, Algeria, where Saharawi children are being press-ganged into military service and not receiving an education. While Tindouf is supposed to be refugee camp, it is increasingly a base of operations for the organization to launch its operations aimed at turning the southern portion of Morocco, known as the Western Sahara, into an independent country. The United States recognizes the Western Sahara as being part of Morocco. 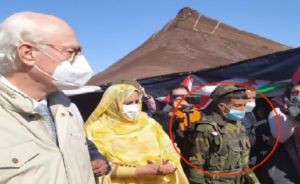 The International Alliance for the Defense of Rights and Freedoms (AIDL) protested against the military enlistment of children by the POLISARIO, denouncing a crime that could be prosecuted before international courts.

“All recruitment of children, their exploitation and their participation in conflicts and wars is completely prohibited and criminalized under international law,” the European human rights organization said in a statement.

The Charter of the United Nations, the Charter of Human Rights, the International Covenants on Political, Economic and Social Law, the 1989 Convention on the Rights of the Child, and numerous other international statues.

Meanwhile, other NGOs have long maintained that no one under 18 should be involved in armed conflict.

AIDL has promised to refer the issue to both Secretary-General of the United Nations Antonio Guterres and United Nations Envoy for the Sahara issue Staffan de Mistura. Beyond that, the NGO has vowed to also bring the issue before the Council of Europe, the Commission Union and the European Parliament.

AIDL says such children are used as human shield and, in some cases, have been trafficked overseas to undergo other military and combat training.